It was a lovely idea my Hubby came up with to go on a hike Memorial Day.

However… the route he’d suggested was extremely popular, so we would have to get up very early to find a place to park and go up.  Groan.  I didn’t want to get up early on a holiday!

As it turned out, it was pouring rain when we woke up, groan again.  Not to be deterred, Hubby managed to get me up and going.  He said, if nothing else, we’ll get in a nice drive.  By the time I was dressed, however, the clouds were dissipating.

We got up to the trailhead of Iron Mountain, after first picking up a Starbucks of course, at around 7:30 AM.

It was lovely.  The beginning portion had us going through a canopy of scrub oak.

The trail was long and arduous, and I was gasping most of the way up.  I was never known to have super strong lungs, even when we did this all the time.  I’m super strong from working out, but did not have the stamina for this long haul.  My understanding was that it was a 2 1/2 mile hike,  It was more like 6 miles round trip with over 1,000 foot altitude gain. Ugh.

We saw so many people, happy people coming down and ones who passed us going up.

One group were these vets, carrying a flag in honor of all the service people who’d fallen.

They’d been up and were now heading down and were only too happy to pose.

WE saw lovely flora and fauna (are bees in the category of fauna?) plus marvelous views of the mountains.  Many wished us Happy Memorial Day and we wished it back. 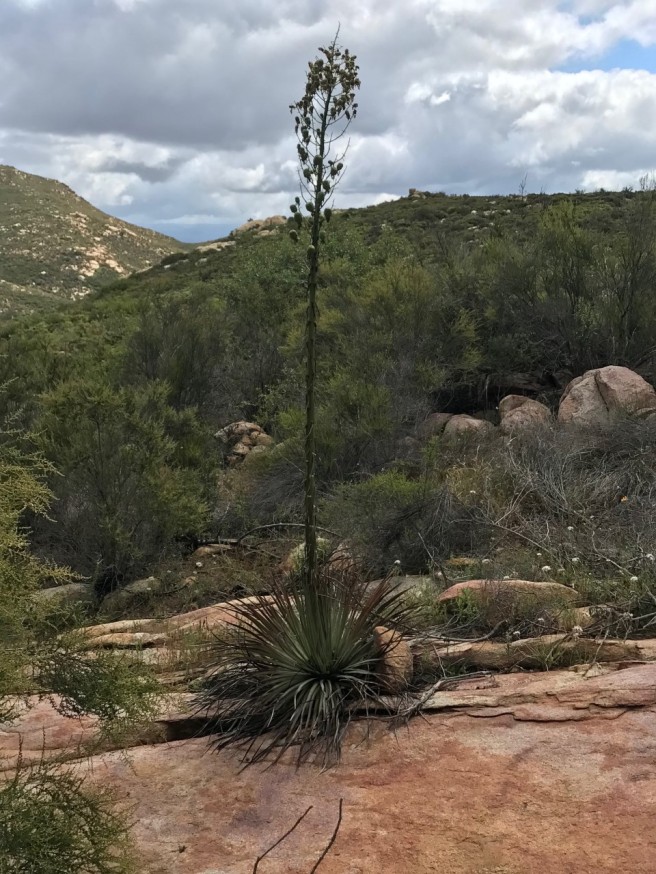 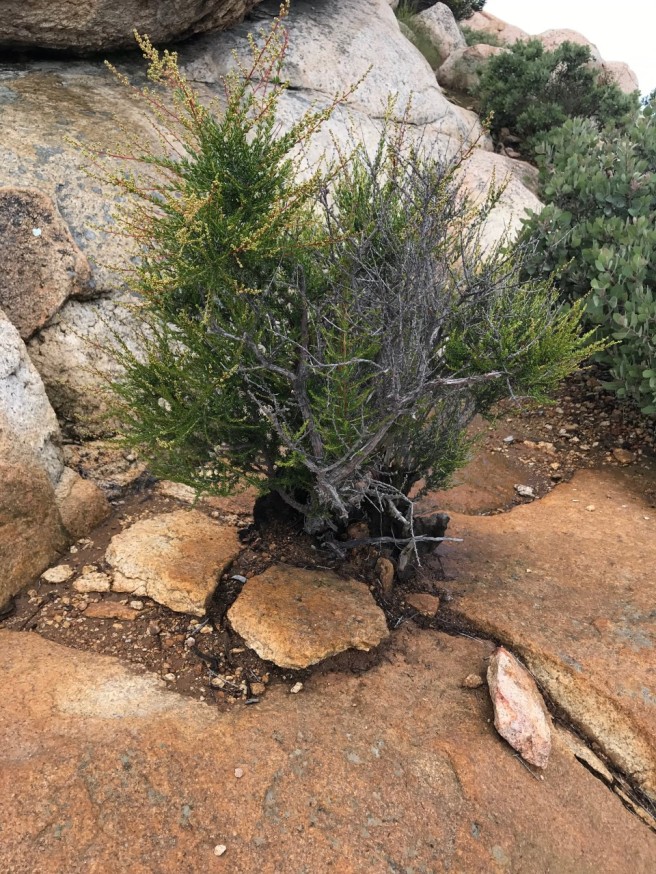 I also had a video that I haven’t managed to download though I keep trying. My apologies.

On the way down, we saw this clump of bees that we can’t figure out how we missed seeing it on the way up, given the size it was and that it was right there. 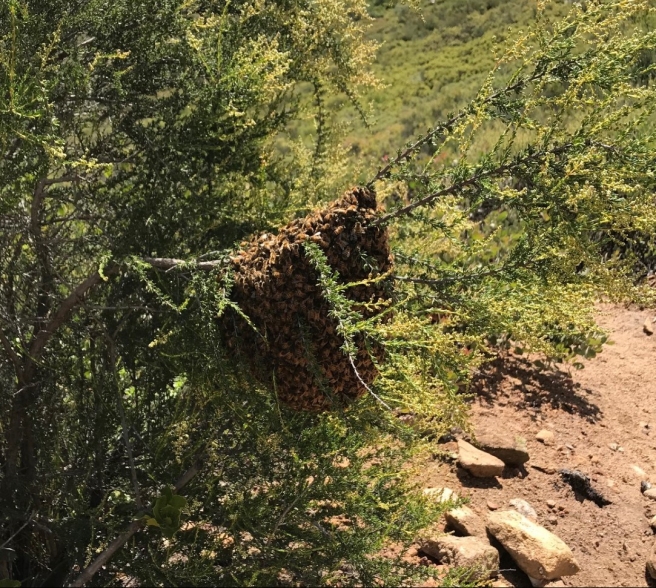 One woman told us it was a relocating bee cone.  I think that’s what she said, so if anyone knows better, please tell me.  She explained that when a hive gets too big, they break off and regroup until a new queen is formed and then they take off and find a place to hive. 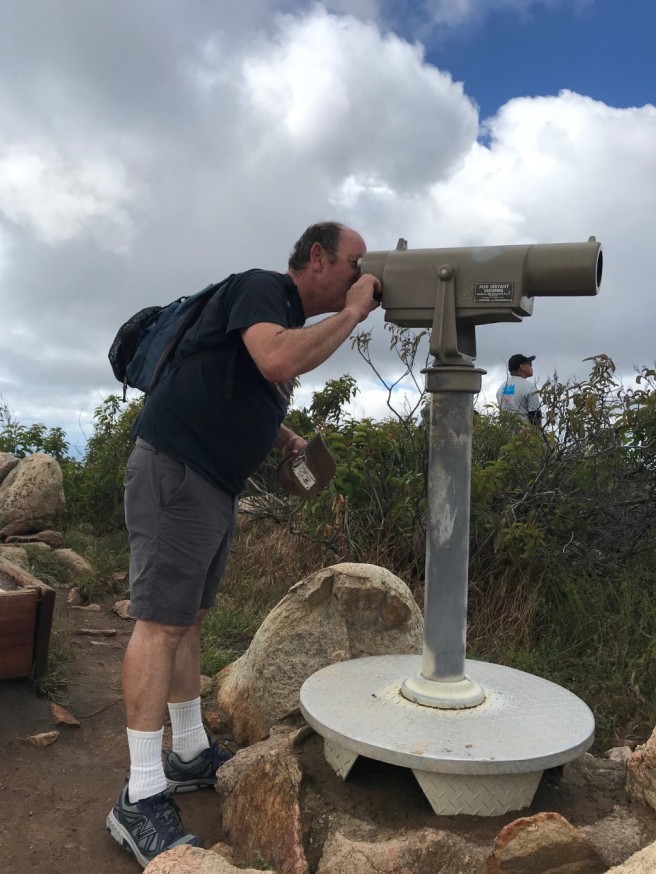 At the top they had a telescope and also this tube-like thing, that had the directional for all the peaks and locations in the area. You would point to the location you wanted and look through it and find where you just drove in from or whatever marker was near your home.  I was all turned around and things were not where I thought they’d be.  Pretty neat actually.

Something else I hadn’t noticed much was the dressing of flowers on the path down just before getting near the end of our hike. Which, I noticed later,

made a great backdrop for our own Memorial Day pose.

When we got down, I could hardly walk, my calves and back were in agony.  And,  and I thought I was fit!  I guess I’ll have to have a chat with my trainer.

All in all, it was a great day! 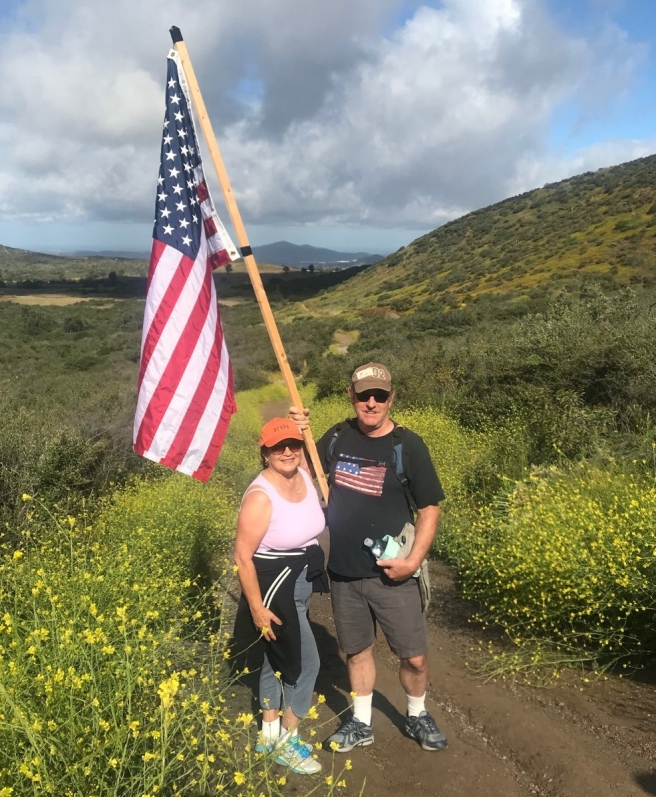 Tarot and Astrology Art for the Architecture of Your Well-Being