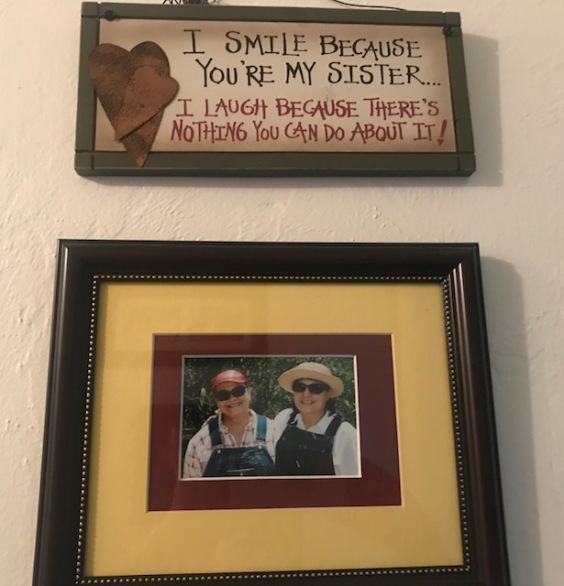 This  photo and a plaque I sent her a few years back, is what we were about.  The pic is real, when she and I were at daddy’s, “working the farm”.  The words on the plaque defined us and were a reminder, that no matter what, she was stuck with me. I think this wall display shows me she was okay with that.  It was apropos too, because in times past, it wasn’t unusual for me to embarrass the heck out of my little sister in one way or another, after all, I’m generally inclined to let it all hang out, so she never knew what to expect.  In my defense, on one occasion, I did so naively,  like when I called her a dildo in public not knowing what the word meant.  I can still see the look on her face, distancing herself from me, hiding behind a clothes rack, and trying to pretend not to know me,  hence the laugh.  She loved me anyway.

Seeing her in the state she was in,  wasn’t what I expected when I flew to Florida to visit her. Actually, I don’t know what I expected, but it didn’t take long for me to realize how badly she’d declined.  A part of me may have suspected some semblance of mom, but not really.

Aside from being greeted by a creepy critter…

and the overwhelming smell of a litterbox  in dire need of cleaning when I walked in,  her apartment was nice.  She even had a corner that celebrates a part of our ancestry.

These apartments are designed for businesses.  The two floors allow a tenant to live upstairs while conducting business below. She used the bottom as her massage room and office. There was everything from accountants, hair weavers, acupuncturists to well, you name it.

When I was told she had a brain tumor, I cried.  I wasn’t ready to lose my sister.  Like a parent, I’m thinking that birth order would dictate departure date and “certainly not any of my kids should go before me” or in this case not a younger sibling.

Well, she’s not going anywhere, at least not physically, but it is a tumor on the pituitary gland and it is having it’s affects. Not cancerous. She kept thinking it was Wednesday or Friday, but could never get the days right.  She repeated the same questions over and over again and it was exhausting.  She did, however, know who I was.  She thought we lived together, so when I said I’d be going home, or mentioned that my hubby, R was in California, she asked “Why, what’s he doing there?” On occasion, she seemed perfectly normal and then seconds later, she would ask an “out of the blue” question as though whatever went on previously had never occurred.

We talked about the tumor and surgery, which got postponed once again. She would promptly forget, but then hours later recall some semblance of our conversation. I talked about it further with her son who had observed the same thing.

Apparently, the kind of tumor she has, is not cancerous, so no one seems to be in a big hurry to operate, which is infuriating.  The doctors at Shand’s keep putting it off as if it is nothing. I guess in their world it isn’t an emergency but in Di’s, it is. She has no sense of time and her ability to function is getting progressively worse.  The neurosurgeon’s at this university hospital are supposedly to be the best. However, it’s the ENT,  that seem’s to be holding up the “show”.

My brother, “M” shows up a few days later and is devastated by the change in her.

Before he arrived, one of her son’s and I took her to the eye doctor, because as I mentioned earlier, what clued us there was something wrong, is that she is losing her sight and it came on suddenly.

The eye doctor is great.  We were there a very long time, but he was thorough.  The good thing, and this is important to the surgery, is that the tumor is not impinging upon the optic nerve, not that it isn’t affecting the loss of sight.  However, it lets the surgeons know where to go to remove it or better yet, where they don’t need to go.  The ophthalmologist believes some of her sight will return and what doesn’t, he believes, he can remedy, at least in part.  So, the good news is she won’t be completely blind.

A question her son had for me was, could Nonie (our mom) have had the same thing?! As I observe my sister’s symptoms, I begin to wonder too. This tumor causes depression, affects hormones and can display itself in many ways. The first diagnosis told us it was genetic.  Then one of the links her son sent  with information on Craniopharyngioma, does not indicate that. I’m not sure I have the right one because this link does not mention it as hereditary. The original doctor had said it was, which is why we wondered about mom.

The procedure is called an endoscopic pituitary surgery, transphenoidal …  anyway, I’ve included the technical but interesting information.  Again, this is info sent by the sons.  Since some of this information differs from what I was originally told, I guess we will wait and see.  Supposedly, she should be fine once the procedure is done.

Right now, she is tired and sleeps a great deal.  She has all the symptoms of dementia and the Alzheimer’s mother was diagnosed with, with the exception of the tiredness.  Mother was constantly mobile, but again, according to the initial information sent, each person develops unique symptoms.

My sister is craving mostly Coke  and hamburgers, but this can include any carbonated drink . . . when she’s not sleeping.  She was never a big meat eater, so this is unique to her.   She gets tired easily and gets cranky when she’s at that point.

Di did not remember any of her doctor visits, so present time events are easily forgotten, but then surprisingly surfaces later as an event that took place long ago.

One of the first things I did when I arrived was liven up the place with Halloween decorations, which she got excited about.  When we lived together, we would always dress up for the kids, like I still do, so you can imagine her disappointment when I said I wouldn’t be there, but. . . that was quickly forgotten moments later.  The upstairs windows were decorated with fall leaves only.

“M”, having arrived a few days later, and I decide to take her to visit family in Alabama, especially our other sister “S”,  who does not have the resources to travel.  Both sisters liked that.  I think “S” was on the verge of auctioning off her firstborn to get the funds to come down. She was understandably concerned, so you can imagine her delight when she learned we were coming to her.  That, was an adventure in of itself.  When we arrived, the GPS screen showed us this and announces, “you are there”, and that was pretty much what we saw initially,  we laughed.  Actually, there was a two story barn to our left and further up, also on the left was a nice modular.

Di walked some of the property (but not all 18 acres) with us as my brother marveled at how nice it was, but after about an hour or two she asked to lie down. She slept the remainder of the visit. Fortunately, she was awake long enough for us to get a nice photo of us girls and “S”s two twin grandkids.

On our way to see “S”,  we stopped off  in Atlanta to visit my daughter, the actor.  Di, surprisingly was awake for a good part of that leg of the trip, but dosed a little before we arrived.

From big city to the country.

After leaving “S” we stayed the night in our home town of Attalla and had a nice dinner. Mine was the catfish, Di had the “hamburger” and steak was “M’s.  Of course, another must have while in the south and what you don’t see with our meals is the plate of fried pickles on the right, which as you can see were gone by the time our food arrived. 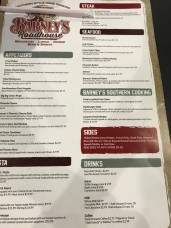 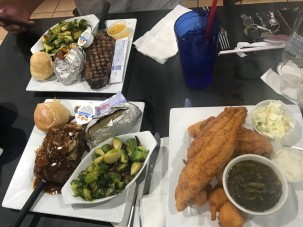 Since our trip was going to be very short,  I posted to our family and church friends that we were passing through and those that got the message in time came out to meet us at a Noccolula Falls Park.  We knew Di could never handle stopping off at more than one place, so we had them come to us. I picked the Falls because I knew, that was a landmark that despite our being away so long, would not move.  More friends arrived but unfortunately we got to talking and socializing so much, I forgot to keep taking pictures. We got countless texts later from those who had not seen my post in time.  Again after about two hours, she had to retire to the truck, but all in all, she did fairly well. We stopped at a “Jack’s” for a hamburger and she then slept all the way home. 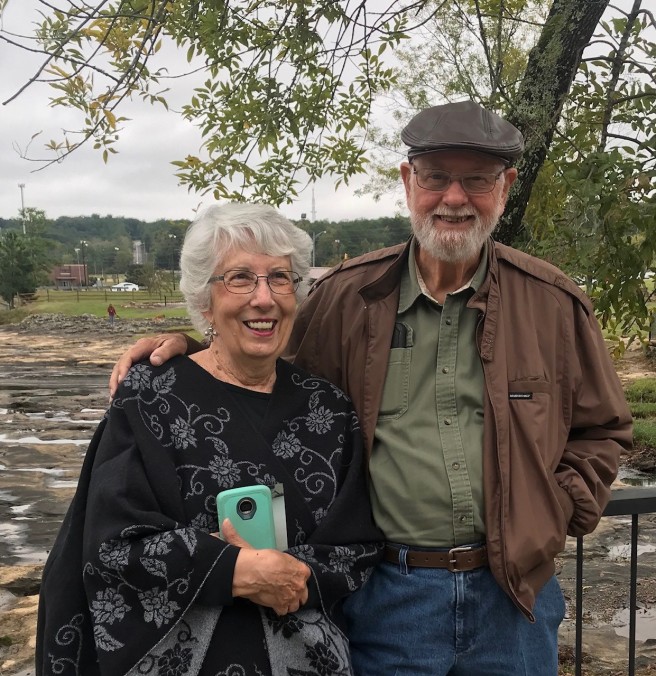 The trip had tired her and the next day she shooed us off. We had suggested heading to St. Augustine, but she said she was too tired.  “M” and I,  went ahead and went, had lunch and walked on the beach for awhile then headed back home. 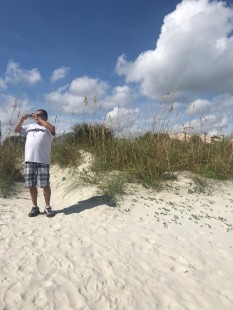 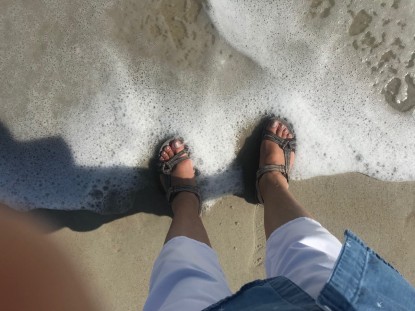 We had wanted to visit the Alligator Farm but didn’t want to stay away too long.  We were gone a little over 3 hours which is her normal nap time length. When we arrived, she was still asleep, but awoke a little later, saying she was looking forward to going to the beach tomorrow. OMG!   “M” and I looked at each other and chuckled.  Instead, we told her that would be a great idea and asked her if she’d ever been to the Alligator Farm… so we went. 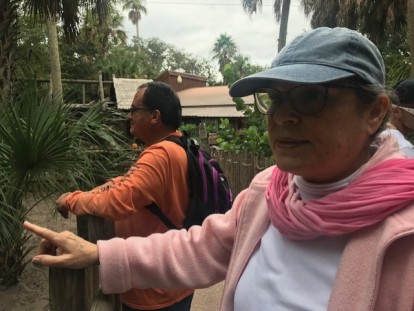 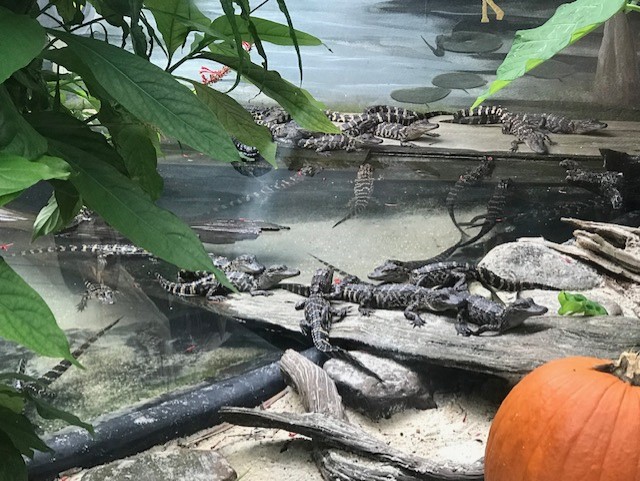 We would have lunch with her at Sweetberries back in Gainesville and then a dinner with her son and his family on our last day. 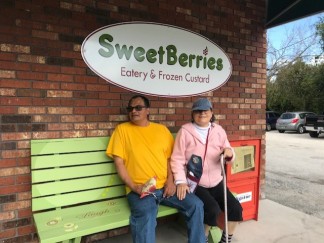 We convinced “M” to take one of her cats, which she’d not had for long, especially since her son is making room to move her into his home with his family.  They have never had pets due to allergies and they are making the concession for Thomas.

Thomas is going nowhere but with her, since she’d found him starving 10 years ago

as a kitten hiding under our house. He had helped her get through helping me care for mother, so there’s a lot of history with those two.  In the meantime, Priscilla has settled nicely with “M” in San Antonio. 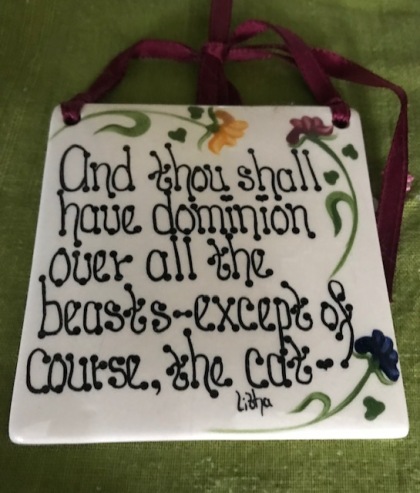 Pre-op is due on the 20th of November, so hopefully soon, we will get our sister back.

I took my flight back home on Alaska, and happened to end up in premium class, which was phenomenal. 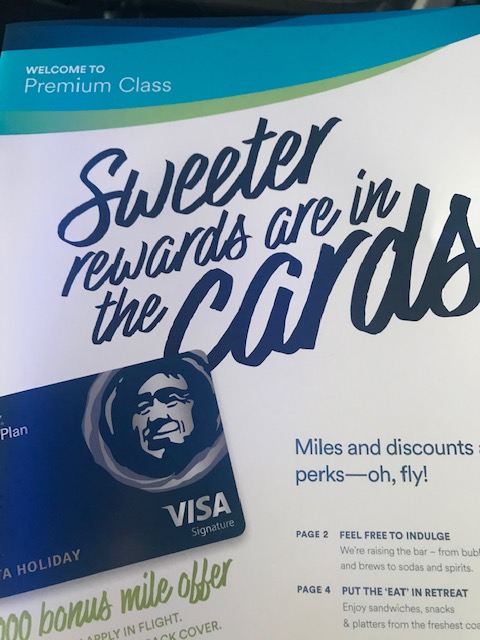