Here it is the wee hours of the morning and I can’t sleep. I seldom have that problem any more but here it is.

I got to thinkin’ about cousin Jack. 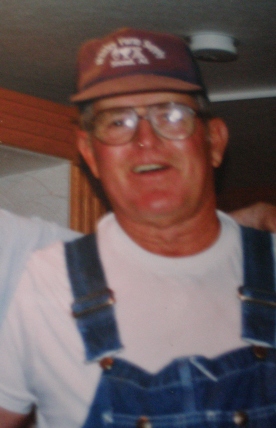 Cousin Jack was an old farm boy from Alabama. Actually, his real name was Israel but we all called him Jack. He spent most of his youth in the army, retired Air Force, so the first time I remembered meeting him, he was already an adult with a family and all. (pic on left) I think I was in my twenties then, with two girls of my own.

I remember Jack hoisting my little city girls up on the fence to watch the hog that had just given birth to a whole bunch of piglets scrambling for a teat. His two boys were older and like their dad, loved riding the girls around the farm on their four wheeler’s.

Jack was older than I but halfway in age between daddy and me. All I know is that he was actually  daddy’s first cousin which made him my second cousin but we were still cousins.

I didn’t see him again for a good many years.  What I learned about him though was that he was hard working and enterprising.  I remember daddy driving us through his land on what seemed like miles of corn fields. It was amazing to see row upon row of fresh corn. That was all his, daddy said. What I remember was that he was always accumulatin’, but mostly land and cows.  I would later add to my opinion of his persona, “hot tempered and opinionated”, after all he was a southerner. A redneck through and through.

It seemed that Jack took a dislikin’ to my Uncle Tracy for “some reason” and felt compelled to compete.  If Uncle Tracy bought a parcel of land, Jack would out do him. If cousin Bill bought a bunch of cattle or more land, he’d out do him. (Cousin Bill was uncle Tracy’s son in law).

You see my great grandma had 12 kids and out of those only 8 or 9 of them lived. I could be wrong on that. But Uncle Tracy and my grandpa were from the same litter, only grandpa was on the older end of the scale and Uncle Tracy was closer to Daddy’s age. Cousin Jacks Poppa was Pervie also near the bottom rung and I heard tell his momma was mean as hell, but I don’t remember her. The pic below shows some of them.

How one family could have kids on opposite ends of the social spectrum, is beyond me. I can only guess the younger ones benefited from the older ones working by getting more education, therefore more advantages. One thing for sure, they were all a hard working bunch. Uncle Fitzhugh also had a Jack who would move to Texas; his sons were younger and fully educated and classier.

Cousin Jack was decent folk, steady and far brighter than he let on to be. Being in the military he got to see the world and was well traveled, but daddy doesn’t know how he survived being so bull headed as he was and all, but he did. Calling him bull headed, well that was like the pot callin’ the kettle black, as if dad could talk.

When I visited Daddy once, Jack noticed the tires on my car were going bald, so he sent me to this tire place in town. Beings as I was from Colorado, I was a bit shy on going to a business I didn’t know for fear of being taken advantage of.  For one, I am a woman and…two, considered a “Yankee” to boot.

He tells me to tell them that “Jack B of Walnut Grove” sent me.  He says, “They know me there”. “They know I got a big mouth and if they don’t treat you right, the whole damn county’ll hear about it!” They gave me a great deal and I was in and out in no time.

Daddy said, that’s how he was. He had a big mouth and at times could be downright offensive, but one thing for sure, if he likes you, he likes you and you couldn’t ask for a more honest dealin’ man around. You always knew where you stood with him.

After I moved there I found that to be true. People either loved him or hated him and that would all depend on what kind of person you were or how you’d dealt with him or one of his kin and/or friends.  That’s what happened to Uncle Tracy. You see Uncle Tracy  had taken advantage of daddy once a long time ago and basically absconded with over 360 acres of good timber land, leaving daddy with only 20 acres. Daddy and grandpa got like $5,000 for all of it, perhaps less.   Truth is, it was grandpa’s and daddy’s temper that interfered with their judgment that lost the land, none the less they all blamed Tracy for taking advantage of a known flaw in their personalities. Daddy never forgot that and of course Jack didn’t either. Loyal.

Jack, like us, started out land poor.  I don’t know how but there was quite a bit of land in the family and each started out with a chunk of it. I used to tell people we owned the town. My husband didn’t believe me until his first visit and he spotted a street named after us. Actually, there were several but that’s all we had. No money. Just land.

Now Jack was different. He may have looked like a hick, but he was sharp. He not only gained more land adding thousands of acres but he had hundreds of cattle, pigs, llamas and for a time raised corn to boot. So, he did right well for himself. He also knew how to handle money, and he knew how to save and multiply it. He put his boys through college and they too did well as engineers and accountants.

Daddy liked him because he said, he wasn’t uppity, he’d give you the shirt off his back if you needed it, that was how he was. He did get in Dad’s face at times and was always bugging dad to get his affairs in order and take care of us kids, but daddy wouldn’t listen. Jack was trying to look out for us to no avail. I respected him for that.

That’s why, when he popped off spit firin’ mad at some politician or some injustice, callin’ them names ya hadn’t oughta repeat, ya let him go because it was “his way”. One thing for sure, there was never a doubt in your mind about what he thought. There were times you’d cringe at the stuff that came out of his mouth. The more I was around him, the more I could see right through his prattle as he’d spew.  I was to discover that it was just talk. There was a heart of gold in there. Half the time I think he was just tryin’ to get folks riled and he did it well. He didn’t mince words and he could get ya to thinkin’.

One day, I’m at work and one of my coworkers tells me he’s dead, killed in a wreck or maybe daddy called and told me, I don’t remember. For sure it was my coworker that told me how. Some big trucker fell asleep or was drunk and went over to the other side. Her husband was on his motorcycle and saw it. Saw Jack. Jack had been decapitated. Killed on the spot. He died in 2007 at the age of 73. His obit states:

“Mr. — was retired from the U.S. Air Force and the United States Department of Agriculture. He entered the military at the age of 17. He served in the U.S. Armed Forces as a Ranger when they occupied Germany after World War II. He also served in the Korean War and saw combat duty during the Vietnam War. At present, Mr. — was a cattle farmer.”

Daddy missed him most. A lot in fact. He was his best friend. But even he said, “sometimes Jack could be an ass hole” and I said “yeah… but he was our ass hole.”

What made me think of Jack is the elections comin’ up. Yeah, we got a couple of them.

The thing of it is,  there are people in life like Jack. They can be a bit hard to take sometime, because it’s all out there for the whole world to see, flawed and imperfect. Even so, I never heard him demean a woman like daddy would and did.  He was a good man. I never heard him say an unkind thing about someone based on color alone so much as work ethics and it was a sorry thing if they were one and the same, regardless. He didn’t pick and choose. You work hard, you get treated fairly. Period.

Daddy said that sometimes he was harder on his boys. I believe it. My boys got to work the farm once one summer and one liked him, the other didn’t so much. He treated them as his own. My sweet nerd was not at all the out door type, so he didn’t quite toe the line and farming is hard. Manual labor was not up his alley but it was good for him. He learned and never held it against Jack. For all his abrasive ways, when the chips were down, Jack was a good fair person and could always be counted on to give you the shirt off his back to help you.

Despite daddy’s ill treatment of us kids, I took care of him when he was sick and Jack liked that. He liked me and yes, I liked him too. I wish he could have been around when daddy passed away,  but he’d been gone nearly four years by then. It would have been nice to get his advice on a few things.